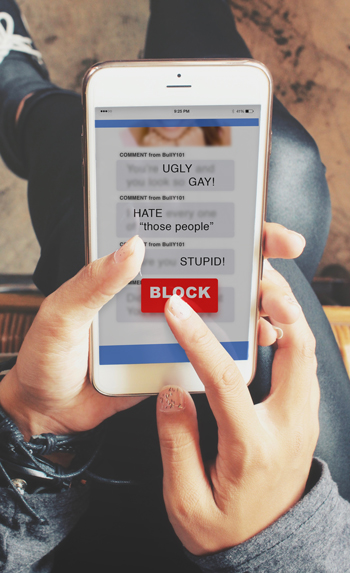 November 14th is National Block It Out Day,

Each of us has the power to choose what we give our attention to online. We can all choose to block out the online hatred, trolls and bullying that makes up the culture of cyberbullying. So let’s block the negative messages we each receive from social media, create a safe positive online space, and encourage and empower others to do the same.

Cyberbullying is when someone repeatedly and intentionally harasses, mistreats, or makes fun of another person online or while using cell phones or other electronic devices. Approximately 32% of the students surveyed by the Cyberbullying Research Center have experienced cyberbullying in their lifetimes. When asked about specific types of cyberbullying experienced in the previous 30 days, mean or hurtful comments (22.5%) and rumors spread online (20.1%) continue to be among the most commonly-cited. Twenty-six percent of the sample reported being cyberbullied in one or more of the eleven specific types reported.

NOVEMBER 14th is National BLOCK IT OUT DAY!

Block negativity from our digital lives!

Last year the third National Block It Out Day (#BlockItOutDay) was observed. An initiative of STOMP Out Bullying, the goal of this day is to block negativity from our digital lives and, by doing so, end cruelty, homophobia, LGBTQIA+ discrimination, racism, hatred, shaming and online violence.

On the first #BlockItOut day over 2.5 Million people created a chain reaction by participating in and spreading the word to their friends and family who Blocked Out cyberbullies, haters and trolls.

In 2020 we reached 3.7 million people. More and more people are joining us to Block It Out! These kind of statistics prove that kids and teens are tired of the cyberbullying and online hate and negativity.

This annual campaign takes place every year on November 14th when everyone can use their power to #BlockItOut.

Block It Out Day is about POSITIVITY!

This day is not about likes vs. dislikes

You know who your friends are. They’re the ones who always include you. Sometimes you worry they’ll get bored of you, but somehow they never do!

And then there are the others.  People who make you feel bad. Scare you. Insult you. Threaten you.

They show up on your social channels, on your phone and on your email.  Whoever they are, wherever they came from--They gotta go!

And the only one who can make that happen is you. Don’t let them in. If a creep came to your front door would you let them in the house? No. The same goes for the creeps all around you in cyberspace.

You also would tell others about the creep lurking around the neighborhood, so do the same here. Pick the right people to tell. Maybe your parents. Maybe a teacher.  But certainly your friends. Somebody’s got to know because even though blocking the creep will help, blocking does not stop this person from moving on to someone else.

Send texts, make posts and get your friends to do the same and pass it on.  Let’s Block the bullies out. Even if for one day!! On #BlockItOutDay, be part of the movement to STOMP Out Bullying and change the culture for good.

Why Block It Out

Take back your power!

When it comes to cyberbullying, an “out of sight, out of mind” philosophy is an extremely effective strategy. When someone who is being harassed and trolled online, often and aggressively, continues to allow that harasser access to their social media, they willingly give their bully the power. This only allows bullying to continue.

It takes bravery, but when a person blocks out their bully, they’re blocking out negative messages and creating a healthy, safe and positive online environment. When that person encourages their friends to do the same, they are leading by example and helping others create a safe space, too.

When we come together in this way, we create a ripple effect that erases the spread of hate and cruelty on social media. On #BlockItOutDay, you block out more than your bully; you’re blocking out cyberbullying for all.

How Block It Out Day Works

On Block It Out Day, STOMP Out Bullying is encouraging everyone who is being bullied, trolled and mistreated online to not only block out their bully on social media, but to go a step further and encourage and empower their friends to block their own bullies as well. We can all control what we take in, and we can and should refuse to take in negative messages of hate and discrimination! We can and will erase negative messages. We can and will take that power away from our bullies.

We are asking youths around the world from every corner of the web to block out their bullies, erase the negative messages, and create a positive, safe digital space for themselves.

We are asking youths to encourage and empower their friends to do the same! We will create a chain reaction that will erase cruelty, homophobia, LGBTQ+ discrimination, racism and online hatred.

Students from the High School of Fashion Industries in New York City were the inaugural group to get involved in #BlockItOutDay.

It is our hope that thousands of schools and companies will participate and join us on Block It Out Day!

How to BLOCK IT OUT

DONATE NOW to STOMP Out Bullying

Just Some of the
Participating #BLOCKITOUT
Schools, Organizations,
Companies and Celebrities