Whether those you love are of the same gender, opposite gender, transgender or gender neutral, who you love is who you love. It is for you to decide.

Pride is much more than a month, it’s how you honor and celebrate your everyday moments, big and small, from transitions to coming out to honoring your chosen family or starting one of your own. It’s a time to capture all the unique and simple life moments that make you one-of-a-kind, alive with pride, meaningful, and remarkable.

Celebrate all of the color and diversity of PRIDE
with STOMP Out Bullying!

There are many ways to celebrate Pride, from learning the movement’s history to supporting the diverse array of LGBTQIA+ voices, to supporting local LGBTQIA+ businesses and charities, to being an ally to your friends and family who identify as LGBTQIA+. No matter how you celebrate Pride Month, it is a time to get together and stand together with the LGBTQIA+ community in its fight for equality and LGBTQIA+ justice.

To help get you in the spirit, we’ve put together a few ideas that capture the joy and self-expression of Pride Month, however you choose to observe it.

Wear Your Pride
Wear it loud, wear it proud all summer long and throughout the year. What better way to display your support of Pride Month than to rock LGBTQIA+ friendly clothing? Get Pride ready - ALIVE WITH PRIDE.

This year we've done something special for PRIDE. We designed this shirt, with our LGBTQIA+ family in mind. As an organization whose work includes educating against bullying, homophobia, LGBTQIA+ discrimination, racism, and more, we created this soft tee with our “Alive with Pride” slogan for you to rock during Pride Month and beyond. LGBTQIA+ pride does not end in June, and neither does our support.

GET YOUR ALIVE WITH PRIDE TEE SHIRT HERE

Host a Mini Pride Parade or Party
Whether you’re celebrating with family or friends, here are some Pride-themed ideas to try:

Discover LGBTQIA+ Films, TV Shows, And Literature
Another great way to celebrate Pride Month is by developing a greater understanding of the LGBTQIA+ experience through films, TV shows, and literature. There are so many incredible movies, shows, and books by LGBTQIA+ creators that you and your loved ones can watch, read and discuss.

Celebrate the Journey by Learning the History of PRIDE

Acceptance of the LGBTQIA+ community has taken decades of passionate struggle to achieve. There was a time not long ago when being gay was not accepted by society at all. Men and women were dismissed from the military, fired from their jobs, discriminated against in public and persecuted for being gay. 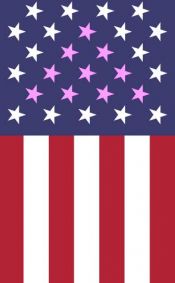 9 out of 10 LGBTQ students are harassed and bullied at school. 58% of LGBTQ youth reported experiencing depression and 45% seriously considered attempting suicide in the past year.

No student should ever be afraid to go to school, connect with their friends online – or worse – feel that their torment is so bad that they consider suicide as a way to end their pain.

Since 2005 STOMP Out Bullying has helped over 5 million students resolve all forms of bullying situations. Our HelpChat Line has assisted over 100,000 students and saved over 2,000 lives. Through our various support networks we have saved over 6,000 lives. These numbers increase daily. Say NO to Bullying, Digital Harassment, Hatred, Racism and LGBTQIA+ Discrimination.

DONATE NOW TO STOMP OUT BULLYING