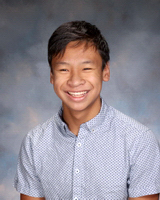 Christopher Cheng is a freshman at Cornell University. From a young age, Chris has demonstrated interest in music, playing the piano since he was five, and adding to it the instruments of cello and guitar. In the world of music, he also plays cello for the New Jersey Youth Symphony, acting as the section leader and co-president of his high school orchestra. He is also the historian of his school's Tri-M Honor Society chapter.

Chris is supportive of people expressing their opinion, as long as they are kind, respectful, and accepting of other people's opinions as well. He is an editor of his high school's newspaper, through which students can express their feelings and emotions over controversial topics such as cheating and the college admissions scandal. By being accepting and open-minded, he hopes that people can learn to find common ground and unity worldwide. He hopes to one day help dissipate the abundance of hate in the world, and replace it with love and understanding.

On a more personal note, Chris has seen how people with disabilities can be ostracized and isolated in society. One of his family members suffers from autism and ADHD, and this has caused much stress and difficulty for the entire family. However, this has taught Chris to see a silver lining and optimism even in the most challenging, difficult times. In his school, Chris also sees how students with disabilities suffer from extreme bullying and are made fun of, often without their knowledge. This often exacerbates their disabilities, when they need love and caring to help them. Through his position as an Autism NJ Ambassador, he raises awareness of autism and hopes to raise funds for treatment and help for those with autism, as well as support for their families. Chris believes that the root of bullying is in our inability or reluctance to accept people with differences.

Through acceptance of those with different beliefs, political views, races, or ethnic background, Chris believes that the world will become more open-minded and less hateful. We should not try to forget, hide, or deny our differences—they are what makes us human. Instead, we should teach people to be accepting and understanding of our differences.

Chris was cyberbullied and helps to inform people about the damaging effects it can cause. In an increasingly modern, digital world, and especially in times where schools are closed, the prevalence of cyberbullying has increased dramatically. He believes that a cause for the rise in cyberbullying is due to people thinking they can hide behind their username or email address and not face the same repercussions. Once you say something on the internet, it's there forever—there for people to see and interpret. He wishes to educate teens to be careful about what they say online, to think twice before they post that hateful comment or post, or before sending that email.

In addition, he wants to educate people on the dangers of racism and hate during a pandemic—due to his Asian ethnic background, he's seen firsthand the hate that people can misappropriate.

Chris is incredibly honored to be part of such a life-changing and beneficial organization. He plans to study engineering in the future and hopes he will be able to make a difference in the world.