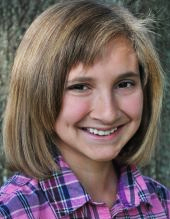 Isabelle “Izzy” Hadala is 16 years old and a 10th grader at a school in Orlando, Florida.  She was born with Ectodermal Dysplasia which affected the development of most of her fingers, toes and teeth.   As she started school, she realized with her condition would come many questions about “what was wrong with her.”  At age 4, she started speaking up for herself, answering these questions and explaining her condition.  In Kindergarten, she learned that not all comments about her condition would come in the form of questions; rather there would be unkind words, teasing and behavior to exclude her.  In other words, Izzy experienced bullying.

The summer before she was to start first grade, Izzy asked her mom if she could do something a little different in addressing her physical difference.  She had been at Hands To Love camp, a camp held in Florida to network children born with upper limb differences and their families.  There she heard about how sometimes it was easier to address the issue all at once by talking to a particular group all at once.  So Izzy asked her new 1st grade teacher if she could give a speech on the first day of school.  During her speech, she addressed all the questions she was used to getting.  She explained how she was not contagious, how it would not hurt to touch or hold her hand, how she could do most things on her own like opening glue sticks and cutting with scissors and how she went to various doctors.  When she was done, she asked her peers if they had any questions.  Some responded with questions about her condition.  Others told stories of friends or family who had medical conditions that enabled them to connect to Izzy’s story.  All through elementary school, Izzy continued to give her first day of school speech to address her physical difference and move past the curiosity so that she could be accepted as an equal in her classroom and by her peers.

Through the years, she proved that difference does not equal disability.  She is a soccer player, an honor roll student, an avid reader, a member of her church choir, a loyal community volunteer and a published author.  In 2012, she entered a writing contest held by Wild Onion Press, a publishing company that features stories about children with physical differences.  Izzy won the Grace McClelland Prize and her story became that of Nathan, the main character featured in Izzy’s book, The First Day Speech.

Since the book’s release, she has been featured on the NBC Today Show and has been invited to speak at various schools and churches.   She is determined to spread her message that everyone is different and that differences are what makes us unique.  Florida Hospital has partnered with Izzy by purchasing enough books to donate to schools and libraries throughout Central Florida.  She is proud to be a Youth Ambassador for STOMP Out Bullying and hopes to help get the book into schools and libraries everywhere so children will learn to embrace differences rather than use them as means to bully someone.