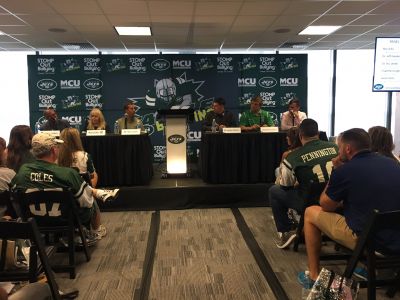 The New York Jets and STOMP Out Bullying announced today that Sarah P. of Fort Lee High School has been named this week’s Jets Upstander of the Week.

When you see someone being bullied and/or cyberbullied and you help them, you stop being a bystander and become an Upstander!

September 23, 2016 — The New York Jets and STOMP Out Bullying announced today that Sarah P. of Fort Lee High School has been named this week’s Jets Upstander of the Week. New for 2016, the New York Jets will lead a new school initiative called “Jets Upstander of the Week.” For each of the 16 weeks during the season, the Jets will ask schools to submit a photo and description of a student that is an Upstander. The Jets will highlight one Upstander a week across their social media platforms and on the video boards during home games.

Sarah P. is currently a freshman at Fort Lee High School. As a student-athlete during her years at the Lewis F. Cole Middle School, she was a role model for other students. In addition, Sarah was an instrumental part of the school’s Student Ambassador Program which includes a select group of students dedicated to preventing disharmony and bias behavior, while helping to maintain cooperation and unity within the middle school student body.

Through the organization’s collaboration with STOMP Out Bullying, the Jets have provided educator prevention toolkits to 1,000 schools in the tri-state area at no cost, conducted an anti-bullying educator’s symposium, created awareness through a robust PSA campaign and annually host an anti-bullying awareness day at MetLife Stadium on game day.

The New York Jets take great pride in a long-standing, year-round commitment to our community. Programs funded by the New York Jets Foundation look to positively influence the lives of young men and women in the tri-state area by promoting fitness, supporting youth football and preventing bullying, particularly in disadvantaged communities. From launching football teams at urban high schools to urging students to be active for at least 60 minutes every day to fostering positive school environments, the New York Jets invest in programs that make a difference in the lives of others. In addition to our focus on youth development, the Jets support the efforts of the Alliance for Lupus Research and numerous established charitable organizations and causes sponsored by the NFL.