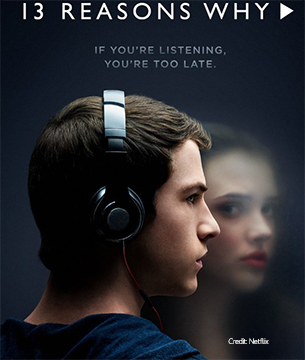 The show communicates to teens that if you are lost and not heard, your story will be heard after you’ve left this world.

With Netflix’s recently released teen series “13 Reasons Why” teens across the country are telling us how much they love this show. The buzz is tremendous.

Forbes Magazine offers some reasons why you should add 13 Reasons Why to your binge queue (followed by a few more reasons why it’s still not a perfect show.)
They say “it’s compelling, the characters are great, the way the show handles time is clever, the music is wonderful, it’s more than just a high school drama, there acting is top-notch, there’s nothing else like it on Netflix, and Hannah is an unreliable narrator. Having an unreliable narrator not only makes the mystery more interesting, it adds to the humanity of the characters.”

Here is how Forbes categorizes what isn’t right in the film: “There’s not enough humor,13 episodes is a stretch, sometimes the show feels too outlandish, they worry about the subject matter, mental illness is glossed over. For all its flaws, 13 Reasons Why is a lovingly produced, well-written and beautifully acted teen drama for all ages.”

I’ll accept Forbes’ two reasons which is the show is compelling and the acting is great. But parents need to talk to their teens and explain why “13 Reasons Why” shouldn’t be their binge!

Based on the book “13 Reasons Why” by Jay Asher, the fictional show opens with a teen suicide and the 13 tapes she (Hannah) left for her friends with listening instructions. It’s a flashback of Hannah while she was still alive and is on the lines of a murder mystery, with bullying, two rape scenes, grief, violence, mental illness and teen drinking.

The show is harmful to any teen who could be considering suicide.

“13 Reasons Why” does not offer solutions to teen problems. It does glamorize suicide and we already have enough teens who have taken their lives. The show communicates to teens that if you are lost and not heard, your story will be heard after you’ve left this world.

According to the CDC, suicide is the third leading cause of death among persons aged 10-14 and the second among persons aged 15-34 years old. And Child Trends reports that the proportion of high school students who report they have thought seriously about attempting suicide continued to rise in 2015 (to 18 percent), after having fallen substantially since the early 1990s (from 29 percent in 1991 to 14 percent in 2009).

Teens identify with people they see on TV and in movies. It’s also important to note that Hannah blames everyone else for her suicide. Suicide is not someone else’s fault. Most teen suicides are contagion behaviors.

Connecting suicide to bullying can be detrimental. I won’t say that all teen suicides aren’t due to bullying, but many result in mental health and other issues. By placing the blame solely on bullying, it takes away crucial risk factors of suicidal behavior that must be focused on.

Ask any of us in this arena, and we all feel very strongly about how dangerous this show is.

Today, the Hollywood Reporter revealed that Netflix is close to renewing “13 Reasons Why.”

Allegedly, the series will end with a special 30-minute PSA called Beyond the Reasons, which features producers including Selena Gomez as well as the cast, doctors, advocates and psychologists offering insight on how to get help or assist someone in need.

This series is a great place to start conversations, but in no way is this show sending a positive message or solution to impressionable and vulnerable teens.