New York, NY, February 21, 2018 … STOMP Out Bullying is profoundly saddened and deeply distraught over the school shooting on February 14th at the Marjory Stoneman Douglas High School in Parkland, Florida. Seventeen people were killed, when a school shooter identified as Nikolas Cruz opened fire on his former school. At least 14 others were wounded. Cruz is in custody and charged with 17 counts of premeditated murder. 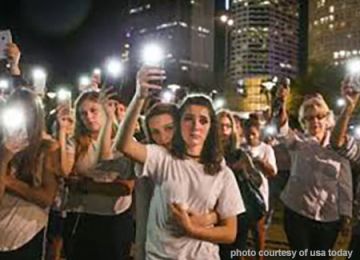 Going to school should be a time for America’s youth to learn, grow, make new friends and aspire both in their future careers and personal lives. Educators train to teach and mold the minds of our students.

Since the shooting, students and activists across the country have called on their peers to demand action. To date, this has culminated in two planned events: the National School Walkout on March 14 and the March for Our Lives on March 24. The theme of both events: ENOUGH IS ENOUGH!

Ross Ellis, founder and CEO of STOMP Out Bullying stated: "We are deeply saddened and distraught over these school shootings. We support our youth who demand safer schools and gun control. I’ve never seen students come together like this and know that this is the time when student activists will be the ones to make the difference in America.”

On February 14th, fourteen of those youths would not have those dreams fulfilled and three educators would not be able to continue to enrich those young minds, as going home that evening never happened. Their families are left devastated and broken-hearted due to another school shooting.

We cannot continue to send our children to school only to practice active shooter drills, with the possibility that they still might not come home and not have gun control.

STOMP Out Bullying sends a message to our elected leaders to end this epidemic of gun violence in America. Students should not live with fear that they will be shot, nor should their educators.

School shootings began with Columbine. This has happened dozens of times over the years. The December 2012 shooting at Sandy Hook Elementary School in Newtown, CT, when a gunman killed 20 children, six adults, and himself, led to calls for action. Since then, there have been more than 1,600 mass shootings, killing more than 1,800 people and wounding more than 6,400. Many of these events led to speeches and events, but Congress refused to budge every time.

In the days since the deadly shooting at Marjory Stoneman Douglas High School in Parkland, Florida, police have been busy with a flood of copycat threats. At least five people – many of them teenage students, have been arrested across the country.

STOMP Out Bullying advocates and calls for strong, effective and sensible gun violence prevention measures. Simply because … we owe it to our children! We owe it to their futures!

The National Day of Racial Healing is Tuesday, January 17, 2023