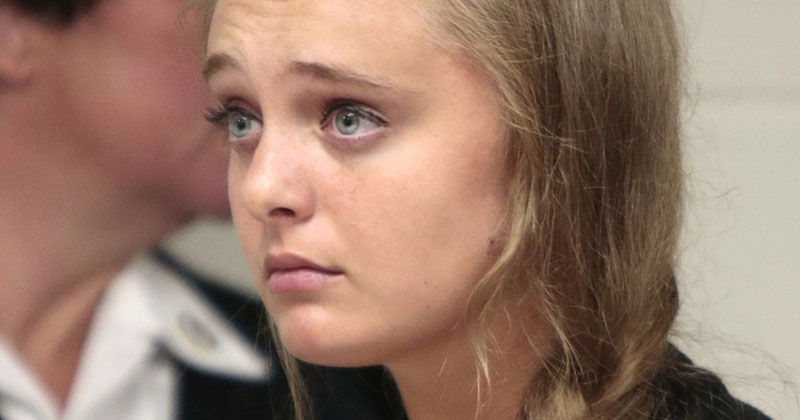 Seven years ago Michelle Carter, was a Taunton, Massachusetts teenager. Today, she is a 24 year-old young woman who was found guilty of involuntary manslaughter by a Massachusetts judge, who described her behavior as “reckless.” She has since been released early from her sentence but her life, and the lives of many others, will never be the same.

How “Kill Yourself” Texts Resulted in a Death and a Conviction

Through thousands of text messages, Ms. Carter’s behavior was a crime that ended in a single phone call and the death of her then boyfriend Conrad Roy.

Michelle Carter’s conduct was morally reprehensible. Some states criminalize the act of convincing people to commit suicide. Massachusetts has no law. Legally this is a grey area but why take the chance of someone taking their life because of you and why chance going to jail?

In July 2014, eighteen year-old Conrad Roy died of carbon monoxide poisoning after locking himself in his truck. He did this because of the texts Michelle Carter sent him telling him to ‘kill himself.’

Carter admitted in texts that she took no action; she knew the location of the truck and did not notify Roy’s family or emergency services.

According to testimony, on July 12, 2014, the day of Roy’s suicide, Carter texted a classmate, “He just called me and there was a loud noise like a motor … I heard moaning … I stayed on the phone for like 20 minutes and that’s all I heard. … I think he just killed himself.”

In another text to a fellow student, she texted “I could’ve stopped him.” “He got out of the car … he was scared.”

Several of Michelle Carter’s classmates testified that Carter didn’t have many friends and pushed Roy to suicide to get more attention.

Prosecutors say that Roy was on the phone with Carter for 47 minutes while in his truck. There came a point where he told her he was getting out of the truck because he feared the suicide attempt was working. Carter texted that she “told him to get back in.”

Just days before, in another text message, Carter wrote “don’t be scared… You’re finally to be happy in heaven,” according to prosecutors.

Alternatively, Carter could have urged him to talk to his parents, go to an emergency room or contact a suicide prevention hotline.

Carter and Roy met in 2012 while visiting relatives in Florida but lived fairly close to each other in Massachusetts. They communicated by text and email.

Her sentencing was set for Aug. 3. The maximum possible sentence is 20 years. She ended up receiving a 15 month sentence which she was released from in January 2020.

This tragic story should serve as a wake-up call for kids and teens who tell others to kill themselves. Not only is it a horrible thing to do, but when kids on the receiving end hear this command, some actually go through with it … just like Roy did.

Clearly anyone who tells someone to do this needs help, but so does the victim who obeys the command.

It’s tragic all the way around. Both of these young people needed help.

Youths should consider that by telling someone to ‘kill themselves’ that they can be arrested and could face jail time.

They should think about how very mean and cruel this is, not to mention extremely wrong!

If you don’t like someone, no need to befriend them and certainly wrong to harass them in any way, show acts of cruelty or give orders to ‘kill themself.’

If someone tells you to ‘kill yourself’ do not listen to them. Why would you listen to someone who is so cruel?

If you feel suicidal, don’t give in to your thoughts. Kids’ brains are not mature enough to understand that there is a tomorrow. You can feel bad for a few days and things can seem different in a few days. Seek help.

Never, ever listen to someone who tells you to take your life. As NY Jets Quarterback Bryce Petty recently told students, “You are beautifully and perfectly made.”

We all have bumps in the road which cause us pain, but consider that you have your entire future ahead of you. By obeying someone who tells you to die, you will never be able to fulfill your dreams and goals.